Expeditions. Journeys. Adventures. Innocent at first, epic in the end. The characters who go on them—closely followed by the reader—learn life lessons through trial and error, while encountering the unexpected, as they walk down the roads fate have paved from them. Through these characters, readers experience the inexplainable: the intimate yet distant emotions for someone embarked on an unsolicited mission of self-discovery. By learning their motives, by gauging their willpower, by understanding their reasons, readers become one with the characters and fear the end of their stories. The journey, however, remains the most rewarding of experiences and only some writers know how to make it invaluable. Author Brent Weeks delivers the fourth and penultimate installment in the Lightbringer series as he digs deeper into the psyche of his characters before they are set loose in the grand finale told in The Burning White.

What is The Blood Mirror about? Following up on the events occurred in The Broken Eye, the story continues to explore the diverging paths of our heroes amidst the rise of the White King’s armies. Deprived of his freedom and trapped in his own contraption, Gavin Guile faces his father’s persecution and slowly withers into madness. Now married to Tisis and supported by the Mighty, Kip Guile looks to stop the White King’s ascension while also dealing with an intimate and sexual predicament serving as a psychological obstacle. Having now attained unimaginable ranks, Karris White has to embrace her new role and keep her empire from falling into ruin. Ranking up as well, Teia has to juggle multiple alliances and not succumb to new powers that may turn out far more devastating for her than ever before.

“Look at your mistakes long enough to learn from them, then put them behind you.” — Brent Weeks

The Seven Satrapies has never been this close to seeing gods emerge and deaths increasing exponentially through war than now. Unlike previous books, author Brent Weeks looks into scrutinizing each of his characters as they endeavor in their personal impasses. Emphasizing on the improbable growth that they’ve made since the beginning of their escapade, the story looks to set the table for the events to come by bringing these characters to realize that their toughest battles might not be on the outside but within themselves.

Being the fourth book of a five-book epic fantasy series, it almost felt like this time around, things needed to take on far different pacing to allow the characters to simmer in their new roles and environments. What kept things flowing lied in author Brent Weeks’ clever and cunning writing style which allowed him to both express internal and external thoughts for each point of view. With it, he is able to infuse his signature humour tinged in sexuality, while also highlighting each of the characters’ individual traits.

Speaking of which, Kip Guile’s point of view springs to mind as his story arc is mostly centered around his relationship with Tisis and a sexual condition afflicting her called vaginismus. Knowing his character and his blatant yet hilarious tendency towards sexual innuendos, this new obstacle simply felt like an inevitable prophecy in his life as he tries to make the most out of his arranged marriage. While the banter remains impeccable as per usual with author Brent Weeks’ characters, it should be noted that his repartees between certain characters are awe-inspiring, especially that which concerns Gavin and his father Andross.

While plot progression is relatively limited, there is one element that shines brighter than any Luxin: the magic system. This being a coup de coeur from the beginning, it continues to be expanded and stretched in unpredictable directions, coating the already existing world with layers of complex mechanisms that bring characters to discover, understand, and utilize their powers in ways that reflect their own personas. And it is how author Brent Weeks assures an interconnected bond between mind, psyche, body, and will that makes his magic system unmatched and magnificent.

The Blood Mirror is an intimate character examination establishing each of the heroes’ plight amidst the brewing warfare within the Seven Satrapies. 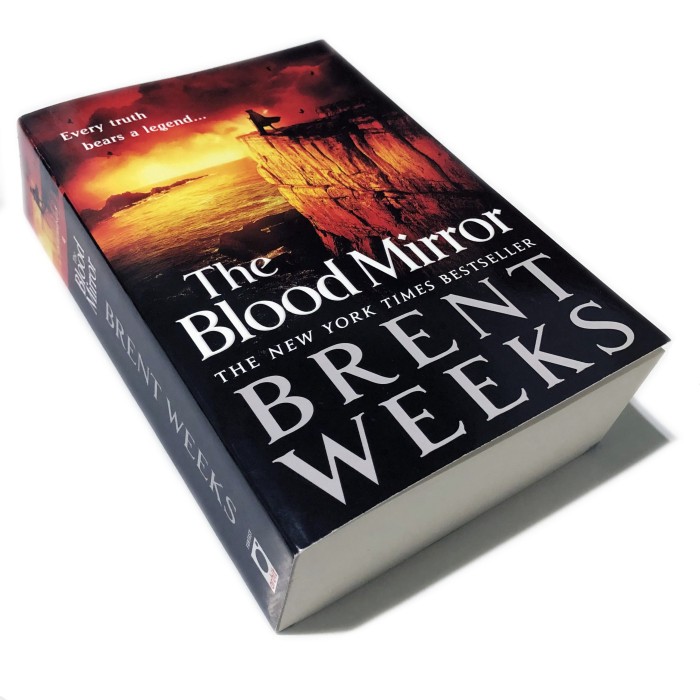 Thank you to Hachette Book Group Canada for sending me a copy for review!

28 thoughts on “The Blood Mirror by Brent Weeks”