Previously in The Licanius Trilogy series:
The Shadow of What Was Lost by James Islington.

They say that knowledge is power and it can sometimes be much more deadly than the swinging of swords, the spraying of bullets, or the casting of spells, but such knowledge needs to be believed by others, needs to be made clear of its importance, if anyone is to make use of it. Half the battle lies in doing something with said knowledge and author James Islington explores this beautifully in his sequel to The Shadow of What Was Lost, the second book in The Licanius Trilogy, as he sends his characters down various threatening roads where consequences are inevitable. Released three years after his debut novel, he continues to showcase his incredible ability to build immersive worlds, develop fascinating characters, and keep readers on the edges of their seat as he teasingly unveils the incredible ramifications of his universe.

What is An Echo of Things to Come about? Picking up where things were left off in The Shadow of What Was Lost with the sudden attack on Ilin Illan, the story further explores the disintegration of the Boundary. Heading north, Davian and his friends look to put an end to this worrisome situation where dark forces threaten Andarra despite the threat that awaits them on their path. Elsewhere, Wirr assumes new responsibilities as he takes on the mantle of Northwarden under the threat of assassination and slowly uncovers new information that raises questions regarding his father’s past rebellion. Asha, however, is in the middle of a secret investigation that is bound to shed light on the disappearance of certain Shadows. As she goes up against the Assembly and the Council, she discovers the origin of the Vessels and a potential cure for the Shadows. Meanwhile, Caeden digs deeper into his lost memories with the powers of his Portal Box and discovers new details that will enlighten certain firmly rooted beliefs amongst many regarding ancient wars.

“The lesser of two evils, or the greater good. Get a good man to utter either of those phrases, and there is no one more eager to begin perpetrating evil.”

There is an impressive amount of individual character development that takes place in this sequel that merits a standing ovation. Author James Islington looks to further push his characters into difficult terrains with grand implications that don’t solely revolve around their own reality and it is beautiful to see them confront these moments with a newly-obtained maturity that is far from what they were initially characterized as when they were all simple students of an institution, protected from the truths of their world. With everyone knowing about the impending war brewing in the horizon alongside the weakening Boundary, they are now off on their own individual life trajectories with an unprecedented resolve to change things for the greater good. However, it does become a bit heavy with the number of names that are dropped within each point of view—despite the excellent glossary at the end—making it almost inevitable to flail with confusion as to the roles of certain secondary characters.

Through Caeden’s point of view, there is also an enormous focus on flashback sequences that can lead to some more confusion in the chronology of events but the relevancy of these parts largely compensates for the issue. In fact, it is especially throughout those moments that the lore is developed and that the magic system grows in unpredictable directions. There is also crucial information that is fed to the reader through these segments that attest to the author’s storytelling abilities. In fact, each of the main characters plays different roles, whether they lie in espionage or politics, but ultimately all gain insight into certain events in past or ongoing events that make each of them intriguing and pertinent to the grand scheme of things. Ending on another epic scale battle and an engaging cliffhanger, author James Islington forges his way towards stardom with another excellent installment that will come to a conclusion in The Light of All That Falls.

An Echo of Things to Come is a stellar sequel further establishing the splendid lore within The Licanius Trilogy as the threat grows in the background and the heroes learn staggering new knowledge about their world and things to come. 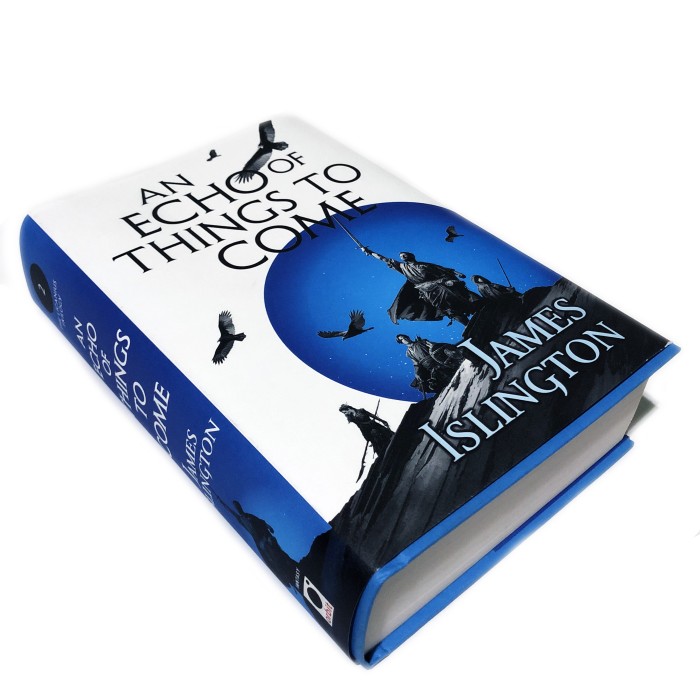 Thank you to Orbit Books for sending me a copy for review!