Title: Doctor Star and the Kingdom of Lost Tomorrows.

Spin-offs can be tricky when an author splits his creative juice simultaneously across multiple titles set within the same universe. While Jeff Lemire has been a hit-or-miss creator to my eyes, there were stories that have merited almost no praise from me while others reminded me why his Black Hammer franchise had the potential to change the comic book game. Where he succeeded this time around is in revisiting the very premise behind this universe, the idea behind looking at superheroes through humane eyes, that is to share his love for superheroes in comics across all ages. From the world of the Eisner award-winning Black Hammer series created by Jeff Lemire now comes a profound and marvelous homage to a classic DC Comics superhero character with Max Fiumara’s poignant artistic style.

What is Doctor Star and the Kingdom of Lost Tomorrows about? This dual-narrative story follows the legacy of the Golden Age superhero, Doctor Star. Father to a son and husband to a wife, Dr. James Robinson is given the funds necessary to pursue some of his most ambitious and unimaginable scientific projects allowing him to go on an astral voyage into space and discover the Para-Zone. As he obtains the powers to thus become Doctor Star and pave the way to some of the greatest heroes in Spiral City, he, unfortunately, has to neglect his family in the process. Following a grave mistake in outer space,  he finds himself at loss with regret when he realizes what happened to his loved ones back on his planet.

This four-issue self-contained graphic novel gives writer Jeff Lemire the chance to present a tribute to Starman, the DC superhero created by writer Gardner Fox and artist Jack Burnley, which follows the story of Ted Knight, an astronomer who creates a gravity rod that allows him to fly and manipulate energy. In Doctor Star and the Kingdom of Lost Tomorrows, the story follows a similar character but essentially focuses on his saga as a poor scientist turned into an exceptional out-of-space crime-fighting superhero. Instead of offering a simple origin story for a brand-new character, without being tied down by the canon story in Black Hammer, writer Jeff Lemire excels himself by tackling a very intimate and ironically down-to-earth tale that looks into the hero’s realization of his blinded pursuit for success and scientific discovery.

To capture the beautiful yet tragic father-son relationship portrayed in this story, writer Jeff Lemire works with artist Max Fiumara and colourist Dave Stewart who accomplish a fantastic job in giving this chronicle the daunting and emotional traits it wishes to convey. With the challenge to draw two distinct narratives (past and present), the artists onboard successfully and elegantly distinguish both timelines. While the present timeline has a much more melancholic tone with characters in their old age, grimmer colours, and slower pacing, the past timeline showcases much more liveliness with explosive colours, tangible dynamism with characters still young and full of dreams, and driven with optimism for a bright future. The creative team on this project thus delivers a stunning yet heartbreaking story worth checking out, with or without having read anything else within the Black Hammer universe. 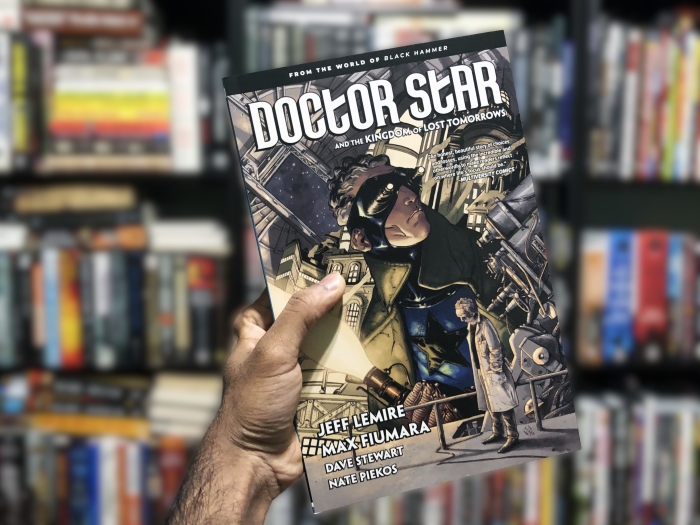 Doctor Star and the Kingdom of Lost Tomorrows is a stellar love letter to DC Comics’ Starman and explores a man’s journey at the heart of a scientific and heroic revolution at the expense of his attachment to his family.

Thank you to Penguin Random House Canada for sending me a copy for review!