Title: And Then There Were None.
Writer(s): Agatha Christie.

Once called Ten Little Niggers and now And Then There Were None, Agatha Christie’s most difficult novel to write was an instant hit and is now a popularized classic that reminds us all who the queen of mystery was and will always be. A perfectly-paced, brilliantly-creative and cleverly-structured mystery is not an easy feat to accomplish but this if there is an author who knows her cup of tea better than anyone else, it’s her. This isn’t just about having a reasonable amount of red herrings, coupled with a bunch of lies, half-truths, and omissions. It’s about teasing the reader, taunting them with a conglomerate of possible outcomes, fasting them till they beg on their knees to know whodunit. With this world’s bestselling masterpiece, Agatha Christie delivers one of the most influential pieces of literature known to man.

What is And Then There Were None about? It all begins with ten strangers invited to an isolated island mansion off the Devon coast by an unknown individual who goes by the name of U.N. Owen. Lured by various promises tailored to their lives, they all accept the invitation without thinking twice. Without knowing what was waiting for them there, it’s only upon reaching their destination that suspicions crawl to the surface and terrorizes our group. They thus disembark from their boat and are led to their residence, wondering where their host was at and what they had just gotten themselves into. Suffice to say that a nursery rhyme, found hanging on their walls, about the gradual disappearance of 10 little soldiers was far from reassuring. It’s only after their supper that the final chapter of their lives unfolds as their wicked pasts come back to haunt them. The game thus begins as they are each marked for murder and nothing can stop it from happening.

Entirely based on a minstrel song foreshadowing the faith of these guests, the story progresses one death after another until the grand finale where all the pieces of this puzzle are ingeniously put together for the reader to gawk at in stupefaction at Agatha Christie’s ruthless plot twist. You would imagine that a story where all the deaths are premediated and revealed beforehand would make for an unmemorable and boring read but this mystery leads you on craving for answers as you wonder how all the pieces will be set in motion for the song to come to life. The suspense is unforgivably constricting and chokes you into flipping through this novel at an incredible pace, gasping for answers, while dumbstruck by the insanity and implausibility of each death.

With not even a dozen of characters featured in this novel, Agatha Christie also does an impressive job in attributing each one of them with a clear-cut personality, demeanour, and purpose. From the moment they meet for the first time, the atmosphere on this private island was palpable and of an unprecedented eeriness. How each character reacted to the events unfolding on the island was genuine although sometimes a bit cliché but their psychology always evolved accordingly. Doubt, hysteria, paranoia. You name it. These characters were stuck in a predicament that no one would ever wish upon another and contributed to a self-fulfilling prophecy that simply made this story more captivating by the minute.

And Then There Were None is a classic mystery with ludicrous tragedies leading up to a logical and inconceivable ending that ultimately remind you that Agatha Christie will always own this genre with her unmatched mind for suspense and plot twists to prove it. 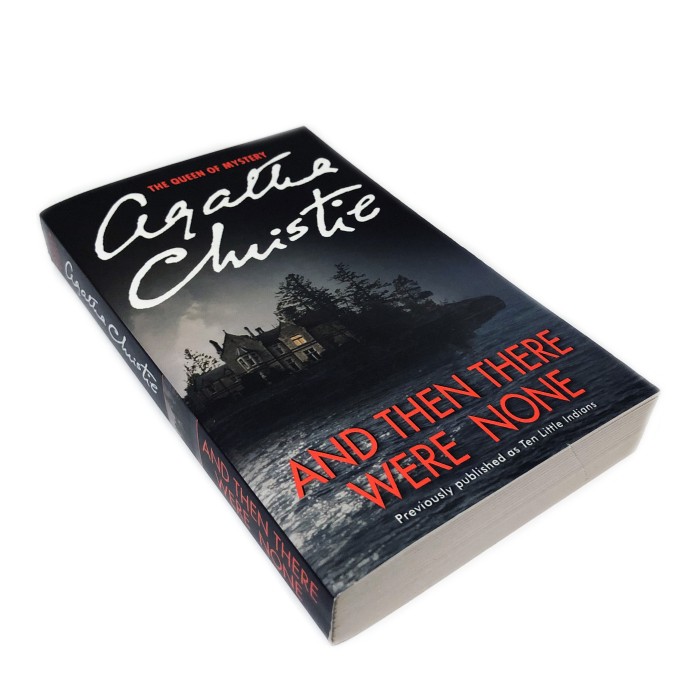 There are many film/TV series adaptations of this classic novel. Have you seen the 2015 BBC mini-series? What adaptations have you seen? What do you think of it compared to the novel?

73 thoughts on “And Then There Were None by Agatha Christie”