I am starting to think that there might be a strong correlation between the books with cover art illustrated by Richard Anderson and the quality of these stories. Drawn in by its mesmerizing design, the temptation was stronger than me for this latest debut novel by Gareth Hanrahan. It was nearly futile to resist his creation as I approached it, inch by inch, to decipher the beauty of this precious grimdark epic fantasy novel. From the promising cover quote by Peter McLean, author of Priest of Bones, to the mysteriously enticing title, I was completely under its spell by the time I held this book firmly with my two hands. As if it was a gift from the Dark Gods, an item with unprecedented powers, one that you simply could not refuse, I was compelled into reading the blurb as an indestructible seal was unleashed upon me. I was thus bewitched into reading what will most likely go down as a classic made for dark fantasy readers. Get ready for what is undoubtedly one of the greatest fantasy books you could ever crack open and devour.

What is The Gutter Prayer about? Set in the city of Guerdon, filled with creative and odd creatures, ancient tunnels, secret passageways and sinister bell towers, a band of three thieves is tasked with a simple job by Heinreil, the leader of the infamous underground thieves guild known as the Brotherhood, to steal a valuable document from the prestigious House of Law. As their mission goes haywire, so does their faith in their master as the streets stink of betrayal, and revenge remains their only viable option if they are to ever have a future. However, things have only just begun to get complicated when Carillon Thay, orphan wanderer and thief, is struck with visions that unravel the dark truth behind their city. Amidst a terrifying conspiracy, she finds herself plunging headfirst into uncovering an ancient magical war between Gods that has been brewing for countless years, alongside her friends, a Stone Man and a Ghoul. With only their strong bond to keep them going, this trio rush to finds answers before the strange creatures crawling in the dark, from Tallowmen to Ravellers, take it upon themselves to wreak havoc on the city of saints and thieves.

If the cover art, title, and blurb weren’t enough to convince you into picking up this precious gem, then let me tell you about the prose. The writing style is a concoction that will spike your senses in ways that you have never known before. Written with a third-person narrative mode, writer Gareth Hanrahan delivers an exquisitely-detailed story that not only grabs your attention and never lets you go but also brings to life every meticulous detail in this bleak and gloomy world. The trio that helm this story is also written brilliantly as each of their personalities shine in the darkest of nights and allow the reader to quickly accustom themselves to these characters.

Cari is a drifter with a past that links her to peculiar individuals within the city. Her recent visions throw her in a traumatizing fit and force her to acclimate herself to her new condition to understand what is going on. Spar is a Stone Man whose father was once the highly-respect leader of the Brotherhood. The plague he’s inflicted with sees that his skin hardens, thus bringing him to have an addiction to a drug that allows him to slow down the disease. Rat is a ghoul, half a human and half a predatory creature, his kind runs around in the underground passages with animal urges that creeps to the surface as he attempts to control them. Together, these three characters form a fantastic band with a unique banter that showcases their strengths despite their weaknesses. Although they are thieves at heart, their common denominator is their bravado and bravery, and it is alarmingly impressive.

It would be a mistake to not also mention another protagonist in The Gutter Prayer: the city of Guerdon. Only a few authors are able to create such vivid environments in which their characters can grow and interact with. This isn’t just about having cities, land, and seas to tease the potential of a world for a series. In The Gutter Prayer, Gareth Hanrahan presents a multi-layered society with a culture and history to complete the portrait. From sewers, alleys to rooftops, the city stretches in unimaginable directions and allows the author to set the tone of the story from the start. To make things even more stunning, the mythology behind the city and the creatures that roam these streets give Guerdon everything it needs to stimulate the reader’s imagination and allow them to fully immerse themselves into this tale. Every single abomination that is introduced is cleverly and graphically described, giving the impression of being dropped off in a world that has been alive for countless generations.

The Gutter Prayer is a hauntingly beautiful debut novel, screeching with deception and revenge, in a magic- and horror-filled city that effortlessly takes on a life of its own. 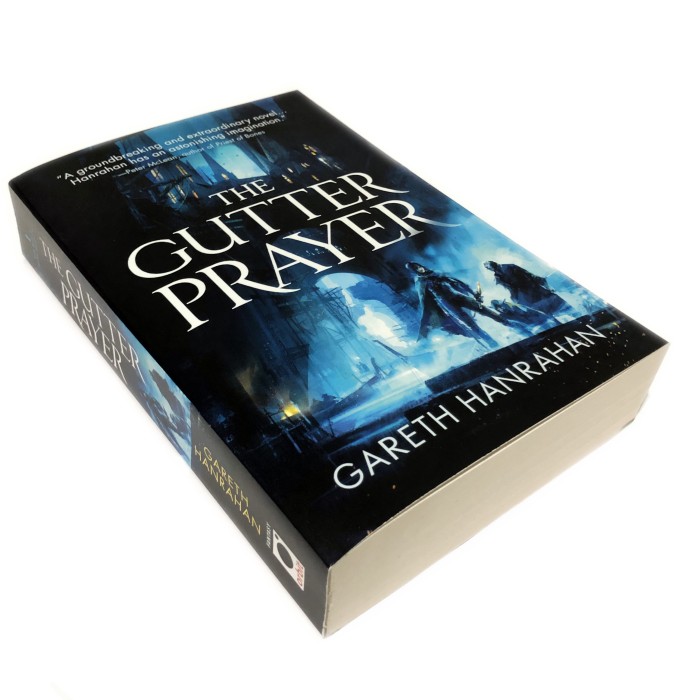 Thank you to Hachette Book Group Canada for sending me a copy for review!

41 thoughts on “The Gutter Prayer by Gareth Hanrahan”