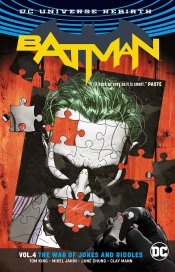 “And so it came. Over the next months, as I fought to hold the city together, Gotham divided. Then fell. Into Slaughter. Misery. Torture. Mayhem. Havoc. Betrayal. Devastation. Insanity.”

— Tom King, Batman (Volume 4) The War of Jokes and Riddles

With unique charisma and a never-before seen story, writer Tom King, alongside artists Mikel Janín, June Chung and Clay Mann, resuscitate the hopes of fans with what will probably go down as one of the most intriguing wars that the Dark Knight and Gotham have ever faced.

Taking place after the events of the New 52’s Zero Year, The War of Jokes and Riddles tosses two of the most unpredictable villains in a pursuit of happiness. Narrated by Bruce Wayne as he raises the curtains on this event to his newfound love Serena Kyle, the War of Jokes and Riddles offers readers a glimpse into the madness that veiled upon Gotham and that flirted with the resolve of Batman.

While the first couple story arcs written by Tom King have been shaky at best, his writing style begins to show confidence. Although the repetitive nature of his script is still present, it now has new purpose and works a lot better with characters whose sanity can be questioned. Tom King also shows that he can have a better grip on his narrative with the extra couple of issues; this volume collects issues #25 to 32.

One of the most surprising joys of this volume also lies in Tom King’s characterization of some of the most iconic villains of all time. His portrayal of both the Joker and the Riddler aren’t reminiscent of the images that fans have of these characters in the past year. Joker is introduced as the maniac we all have grown to love, but also comes with a life crisis. Batman’s ability to predict all of his moves has taken away the Joker’s ability to be unpredictable, hence taking also away his ability to laugh since being unpredictable is what cracked him up. This struggle to find anything funny is what is developed throughout the story arc and is delivered remarkably in my books.

Riddler is also portrayed differently with far more charisma and with a stronger physical build. He shares a struggle with Joker and looks to solve the greatest riddle of them all: Batman. But the problem that he points us is how they’ll both lose if either one of them does the one thing they both want first: kill the Batman. In hopes of building a partnership, these two villain quickly show readers that they are however incredibly incompatible. And so was born the War of Jokes and Riddles.

With two completely different modi operandi, these two insane villains grow in threat level and seek the aid of other villains, thus creating a massive division among all the criminals in Gotham. Tom King does a fantastic job in showing how this war among criminals could only create more casualties as the days go by, but it’s the artwork that delivers the biggest jolt by presenting us with majestic and exquisite full-page panels of the chaos that rids Gotham.

Credit has to be given to Mikel Janín (as well as the other artists who have worked on this story arc) for pencils and ink. Although there’s a lot of action going on, the story also focuses on the characters. A lot of panels are devoted to the details and the little gestures, but don’t be fooled. As little as they may be, they often held a lot of meaning. For example, there’s a whole page with equal-sized panels with just Joker trying to laugh. I felt like they really nailed those moments and conveyed far more than what words could ever have been able to do within a page.

The story also introduces us to an intriguing character who plays a pivotal role in the denouement. An interlude chapter offers readers the opportunity to understand his character and to quickly build an emotional connection to his destiny. At first he’ll feel like a question with no answers, but as Bruce Wayne continues to tell this story, you’ll only feel the ultimate blow when the character’s real purpose is revealed. Which brings me to mention how brilliant the ending was.

The final issue of this story arc is one that hit the Internet like a storm. Not only did it end on Serena Kyle’s verdict on Bruce Wayne’s big question, it also gave us the ultimate plot twist to the War of Jokes and Riddles. Readers found out what Riddler’s real intention were, plans within plans were outplayed and Batman gave us a glimpse into his mind and his conflict regarding what really distinguishes him from all the villains out there.

Brilliantly executed and cleverly plotted, Tom King sets the table for bigger things to come. While there are scenes throughout the story that challenged my sense of belief, I’ve come to compromise with King’s vision and see if this story arc is the beginning of great stories to come. One thing is for sure. The War of Jokes and Riddles is by far the best story arc that King has written so far for Batman.