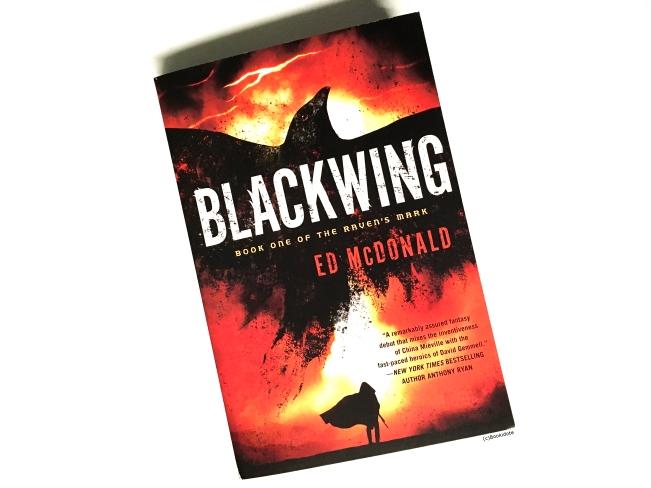 “I don’t like things that don’t make sense. Not until I’ve put a knife in them.”

It would be a mistake to overlook this book. Ed McDonald’s debut novel, the first book in The Raven’s Mark series, is a phenomenal piece of literature. It glows with fiery passion and an inhuman mastery of creativity. There wasn’t a single moment to take a breath as it held a tenacious grip on my attention to the point of chocking me with fast-paced action. Blackwing is a beautiful and sinister fantasy story. Its ability to create a wonderful and unique world is astonishing and bleeds with a desire to seduce you into the mind of Ed McDonald. Reading this felt like the work of a genuine mastermind who’s penmanship has went through hell and high water. Forget about soft clouds and pretty rainbows. Blackwing will show you misery and demise melded around hope, reason and humanity. This novel deserves so much praise and absolutely needs everyone’s attention. So what are you waiting for?

Blackwing follows bounty hunter Ryhalt Galharro into the heart of the Misery. Told in first-person, you’ll quickly be acquainted to the veteran commander with a tough-as-a-rock personality as he’s tossed into one of the most intriguing and undesirable conspiracy. His past has shaped him into the man he is today, leading his squad, essentially composed of Nenn and Tnota, into some of the darkest and most notorious places in the Misery. I simply can’t go on without mentioning how the banter between all these characters was executed with insane finesse and sarcastic humour. I ended up taking notes on some of the nasty comebacks (pretty vulgar though) for future purposes. The world-building alone deserves a gazillion applause as it sucks you into a nether of suffocating darkness. The creatures that lurk there, whether its skweams, gillings, grudges or even things that don’t have names, will come to life in remarkable ways and make their own appearances in unexpected and memorable ways. Using the first-person narration worked wonderfully in putting forth a strong and impressive protagonist to love and cherish during the whole adventure. It’s even more impressive when he dies the dumping of all the knowledge we need in understanding the world Ed McDonald forges, as his experience filters the content into heavy and juicy chunks of meat.

I’m not even kidding when I tell you that he does a near-perfect job in creating one of the most fascinating worlds and cast of characters in fantasy. Ed McDonald does so seamlessly and strives at delivering some of the most interesting history and background information in literature. Whenever the character’s have a moment to rest and plan their next move, there’s always a piece of information that is squeezed in to make the whole world that much more fun. But rest assured, the moments of peace of rare as hell and the novel is just one giant turning windmill. Whether its the story behind the Deep Kings and the Nameless or even the past of our own protagonist, Blackwing is a restless and fascinating debut that simply does everything perfectly. Although the Misery is described as a land filled with the most dangerous creatures and the most depressing and sorrow-filled landscape, the novel also transports you into beautiful, rich and sanctuary-like city where your rank and title either offers you privileges or places you at the bottom of society. Then again, a story with a conspiracy at the heart of everything will surely come into play on these spheres of life. Blackwing simply excels at creating its own society with its own politics and economy to make the gears of life keep on rolling, even when everything seems so bleak and hopeless.

The mechanics behind the magic system in this world is also to die for. With Spinners and Darlings—you’ll just have to pick this book up to find out what they are—there isn’t a moment where the action sequences don’t profit of their unique abilities to showcase some of the most deadliest yet beautiful magic tricks out there. However, captain Ryhalt Galharrow’s own expertise with his weapons and fist make his narration and scenes simply awesome. With a novel this dark and post-apocalyptic, it might also be necessary to mention that the gore and profanity is up to par with the quality you’d want from this genre. The amount of blood and swearing is high, but at a perfect level, without ever being excessive and futile for story-telling purposes. While our bounty hunter is merely a pawn to bigger things executed by people with higher rank or even in bed with stronger forces, his journey through dark lands makes this battle for survival absolutely stunning and captivating. There’s so much that happens in this first book, that you’ll really just have to trust me and pick it up and find yourself enticed by Ed McDonald’s writing and the world he’s created.

THANK YOU TO PENGUIN RANDOM HOUSE CANADA FOR SENDING ME A COPY FOR REVIEW!

How about you read this book for yourself!

You can purchase your copy @Amazon Canada or @Chapters Indigo now!

30 thoughts on “Blackwing by Ed McDonald”