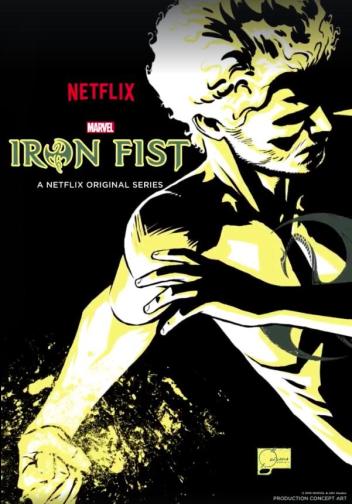 Summary: After being presumed dead, Danny Rand returns home to New York after fifteen years, only to find things aren’t as they were.

Director: John Dahl (for this episode)

Netflix and Marvel have been pouring out superhero shows for quite some time now. Every character introduced added a whole new story that hinted to a bigger and unknown enemy that would emerge from its darkness when the time will come. Just like the Avengers in the Marvel Cinematic Universe, the Justice League in the DC Extended Universe or the Legends of Tomorrow in the DC TV shows, these Netflix shows have been preparing fans for the arrival of the Defenders, a neighbourhood-level team of superheroes built around the four heroes that have so far gotten their first seasons out on Netflix: Daredevil, Jessica Jones, Luke Cage and Iron Fist.

Iron Fist is the last piece of the puzzle and it is most likely to dive deeper into the main plot revolving around the big bad villain, while having its own side-stories to deal with. In all honesty, this might have been the weakest pilot episode of all four heroes, but it is far from being as bad as a lot of critics have been shouting about. The story kicks off with Danny Rand (played by Game of Thrones actor Finn Jones) 15 years after his assumed death. His first contact with home is meeting up with two of the only people left who have been considered family before the tragic incident that took the lives of Danny’s parents: Joy Meachum (played by 90210‘s Jessica Stroup) and Ward Meachum (played by Banshee‘s Tom Pelphrey).

A typical rag to riches story lines quickly shines between the lines, but reminds us that originality is not what will reel a lot of fans in as other superheroes have had a similar plot done before (see Batman Begins or Arrow). Introducing us to a protagonist that struggles to convince his surrounding of his true identity, the story also fights to showcase social issues around homeless individuals and mental illnesses. The problem that quickly resonates from episode 1 “Snow Gives Way” is its inability to be convincing in so many departments. Whether it’s the acting, the action or the writing, Iron Fist‘s pilot episode struggles to be compelling and to excel in anything in order to truly captivate the crowd.

I just can’t not talk about the action sequences in this show since the expectations were pretty high when it came down to a martial arts specialist like Iron Fist. Let’s just say that I was really left unsatisfied and deeply unimpressed by the presentation. It’s not that it’s bad or anything, it’s because of how unimpressive it felt when the moment came for Danny Rand to show us what he was made of. I also felt like the power behind Danny Rand’s moves didn’t translate too well in the action (the impact and the result never truly felt reciprocal). The added editing that went into these scenes in order to give multiple camera angles, coupled with the shortness of every fight scene, also made it hard to be engaged and absorbed by these moments. I was still able to appreciate the more defensive and disarm-rather-than-destroy style that was showcased.

What we get in this first of many episodes does give us a good idea of Danny Rand’s fighting style as well as the fluidity of his movements. There’s something very unusual in his skills as they aren’t commonly seen in a modern era, especially in a modern setting. In fact, even if the show starts off on a much slower pace than anything we might have seen before, it does a good job in introducing a character that has yet to be accustomed the rules of modern society and a character that will need time to understand his new surroundings in order to be able to bring change where change is needed. While fitting in seems to take a good part of the shows attention, we also get to see the Meachums’ perception of things throughout the story. What else were business people supposed to believe than a conspiracy theory to sabotage their company when a homeless man claims to be the Danny Rand, the one guy who could take back Rand Enterprises from the Meachums’?

The show also introduces us to Colleen Wing (played by Game of Thrones‘ Jessica Henwick) and gives us a pretty good idea of what kind of asset she’ll be to Danny and the story that will unfold. Is it all right if I also mention that she’s one fine bad-ass woman that only prompts a desire in me to see more of her throughout the season? The first episode also unveils another surprise character that will add another element of mystery to the story. This was probably the part where things start to become pretty interesting as it distinguishes the premise from what we’ve seen before. Episode 1 “Snow Gives Way” also ends on a cliffhanger—no surprise there—that will further challenge Danny Rand’s ability to convince the world of his identity.

If anything, a lot of important key characters have been introduced in this first episode and only gives us hope that the show will find it’s own identity over time. Its potential is undeniable and plenty of interesting elements have been teased so far. Filled with flashbacks to give fans more insight on Danny’s past, the show does a fine job in introducing the Iron Fist. From legend to reality, the character is a challenge to bring to life. Hopefully the story doesn’t try to hard to tie things up with the other heroes to serve as a bridge to the Defenders. Iron Fist needs time to be built and developed and to do so, a solid origin story that unveils the secrets of his past is much needed.

One of the most popular comic book series regarding the Iron Fist is Ed Brubaker’s The Immortal Iron Fist. There are countless other stories that also pair the man with another Defender to create the Heroes for Hire.

Have you read any of those comics? Did you start the show yet?