The past has a funny way to catch up to you. It follows you like a shadow and emerges at the most unexpected turns. It doesn’t have worries, concerns, dilemmas or problems. It does however bring them upon you. Nicolette Farrel left her hometown, friends and family after the disappearance of her best friend, Corinne. She didn’t look back and is now keeping herself busy with work, a fiancé and a harmonious future. But sometimes, things don’t last forever. She has to revisit the past she once left in order to take of her father who still resides in Cooley Ridge, right in Philadelphia, her hometown. Although it’s been 10 years since she’s last stepped foot down memory lane, things weren’t about to get any easier for the girl who had a future set in stone. Another girl, Annaleise Carter, goes missing and she will be the trigger to the unveiling of buried secrets and the discovery of the truth behind the disappearances. 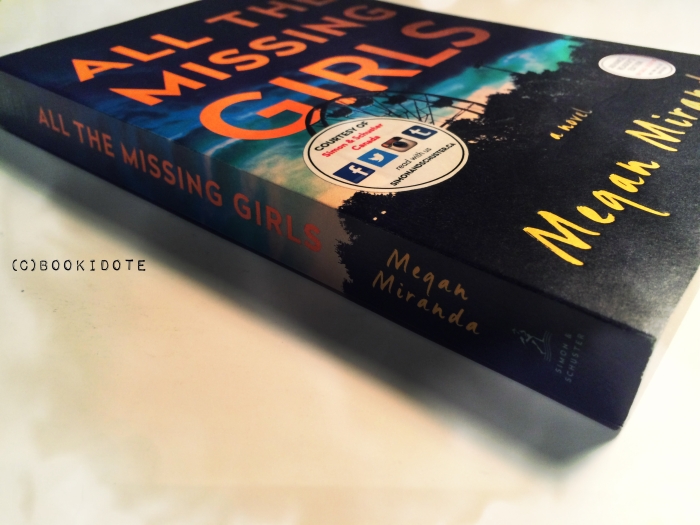 This psychological thriller isn’t like any other novel, it’s mostly told backwards. How on earth is that possible, you wonder? Ask Megan Miranda. It is a challenge for titans to attempt storytelling backwards. There’s a lot of advantages that came into telling the story this way, and, off the bat, suspense was one of them. Although suspense is key to a lot, if not all crime novels, the format of this novel has made suspense hard to fail throughout the book. All the Missing Girls has 15 chapters dedicated to 15 days, where day 1 is the disappearance of Annaleise Carter. By starting on the 15th day and going a day back as you go through the novel, Megan Miranda assures reader that this novel will be one of the most captivating reads of the summer. Every chapter ends with a nifty cliffhanger that just has you craving for more. More dialogues, most twists, more dark secrets.

What I thought the most fascinating in a novel told backward is how complex character development became. Usually, while reading a novel, you get to see the characters evolve in front of you. They face life, learn from mistakes, examine the past and approach the future in various new angles. But in All the Missing Girls, the characters had already lived the events and what the readers will want is not to see them devolve, but rather find out more in what kind of person they each were and are. It’s in finding out the flaws, the mistakes and the decisions that had made the person that is introduced in the first chapter (Day 15) that makes this such a thrilling ride. I just loved how I was hooked to the singular characters, and how I kept on being forced to guess and second-guess the truth behind the disappearances. Never did I feel like I had the whole truth within the palms of my hands, and that’s what makes this novel so great.

Characters were definitely intriguing from head to toes. They each had their own feelings, resentments and motives. The lives they carried on with had transformed them, while other things were kept within themselves, untouched. The novel has a pretty small world in which everything is circumscribed. This made for more focus on the characters, and less suspects to keep an eye on. The story is told through the eyes of Nicolette Farrell, the protagonist, and this is something that was well explored by the author. While she had ran away from a past without seeking answers, she now comes back into it and drowns in unanswered questions. There isn’t a moment throughout the novel where this isn’t felt by readers. The way she reacts, talks and does things reflect perfectly her troubled state. It always felt like her conscious was being draw into a life that she left to rot, and now has no power in her to stay clear from it. In general, the fact that every single person, including the narrator, was unreliable, made it so that readers had no where to hide but in the things that were told to them. Whether they were partial truths or complete lies.

All the Missing Girls contemplates a unique way of storytelling. Complemented by great writing, the author doesn’t fret in using flashbacks even while the story is being told backwards. Every chapter had its own pot of clues for readers to put their hands in and savor. Whenever you’d think you understood a character and knew what he could potentially do, there would always be more to it that will end up pointing fingers at someone else. In all honestly, the story had a lot of stressful and thrilling moments. I particularly enjoyed the structure of the book and love that it had added a series of new layers to a casual way of telling stories. If there’s a psychological thriller that should be given a shot, it’s definitely this one.

Thank you to Simon & Schuster Canada for sending us an advance copy for review and for hosting the Summer Reading Blog Tour!

Don’t forget to check out Simon & Schuster’s website for the Summer Fiction Blog Tour and to join their ongoing contest for the chance to win amazing prizes!! Do so by clicking on the #readchillrepeat tag right now! 😀

Did you read All The Missing Girls yet? What did you think about it?

You haven’t, you say?

How about you read this novel for yourself!

You can purchase a copy of the novel @Amazon

12 thoughts on “All the Missing Girls by Megan Miranda”