“It’s dangerous, Icelyn. That’s what it’s like down there. You can never go down there. Never.”

There was this trend in young adult books where everyone and their mothers could only write, talk and look at dystopias. Don’t act all surprised. I’m pretty sure you can name a couple hundred of series right off the top of your head. Today, we’ve got a whole new trend that focuses more on retellings. Oh, the famous modern retellings written in order to reach and please the fans and those who are oblivious to the source material. Wouldn’t it be nice to spice up our lives again with another dystopia featuring a female lead and a post-apocalyptic setting? Cue darkness. Cue spotlight. Here’s The Threat Below.

Following the Great Death that nearly eliminated humanity from the face of the Earth, the descendants of the now remaining hundred individuals live at the top of a mountain. They call this village Mountaintop and it is protected by giant wall to keep away the very creatures that pushed humanity to the brink of extinction. A thick and opaque cloud line also surrounds the mountain, right after the wall. Impossible to see what’s beyond, citizens of Mountaintop live in isolation and desire nothing more than harmony in their well-structured, yet primitive, society. Until their water source is poisoned. In search for answers, a chain of events is unleashed and 17 year-old Icelyn is off on an adventure that will unearth the buried secrets of the past and awaken a force that shouldn’t be reckoned with.

“So much of life is lived looking away from each other, afraid to face a person as they really are, deflecting feelings and ignoring vital moments. I’m going to drink it all in right now.”

The Threat Below could make up for an interesting TV show with all the wonderful ideas that are spread throughout the book. In all honestly, Jason Latshaw had a mass of ideas to make sure this novel felt post-apocalyptic. The novel was so rich in theses ideas, I could basically smell the dystopia all over it. In fact, the whole novel is built upon solid and well-documented premises for a dystopia. Because the chapters were extremely short, but numerous, it was nearly impossible to avoid pointing out all the ideas one by one. From a restricted and controlled allocation of resources for survival to the division of the people in different factions (this book preferred to split the humans in Veritas and Cognates), you’re bound to feel the heavy density of the high altitudes. Although Jason Latshaw didn’t hide his various attempts in building the perfect world for his story, the themes discussed are intriguing.

The best part of this novel lies in the world-building. Humanity is restrained to live their lives on the tip of a mountain, and if that wasn’t obvious enough, the privileges they have are stripped down to a need-to-survive basis. While the Cognates are seen as intellectually superior, their faction has evolved without pleasures as we know them (music, art, freedom to love whom we wish, etc.). The Veritas, obeying the orders of the Cognates in order to maintain the harmony in the society, have a much more similar culture and beliefs as their common ancestors before The Great Death happened. While the two factions live their lives with the sole intention to survive and perpetuate the existence of humans, the story leads readers to discover all the thing they take for granted in our current age and time; yes, of course, I’m talking about our age and time, my friend. As Icelyn and friends discover the secrets of the past, they also question some fundamental existential questions (sometimes weakly approached) and make this novel a fascinating read (and sometimes a poor one).

My biggest downsides to Jason Latshaw’s debut novel is the ensemble of characters and the narration. As much as I enjoyed the succulent ideas implemented in the novel, I fear the characters (especially our dear protagonist) ruined it all for me. Icelyn’s thought processes and decision-making is dumbfounding; especially when she’s the main narrator for most of the novel. Her character simply annoyed me too much. From the moment she was introduced, I knew there was no way she was going to evolve into someone more likable or realistic. Her tone, her reactions, her attitude, there’s nothing satisfying in her presence. To top it off, her adventure unveils some really big twists, but her adaptation to these events was really outlandish, impossible to understand and beyond reason.

It also didn’t help that there was a ridiculous love triangle in the mix. I understand that Icelyn (a Cognate) hasn’t known physical contact or learned the depths of love in her life, but the love triangle that was implemented in The Threat Below was just awkward and unnecessary. At least Icelyn’s sidekicks had some more interesting aspects to their personas; although the whole cast were a burden to carry around the adventure. I really think that if it weren’t for the world-building and the various themes that were tackled upon, this book would’ve flopped. With weak characters that tried too hard to be something, a porous narration was all that was needed to drag this down. And that’s what we get. With the innumerable transitions, there was no way I was going to get hooked to the characters. As much as having 1st class seats into the mind of the protagonist should give great insight, this narration did nothing more than showcase flaws, after flaws, after flaws. 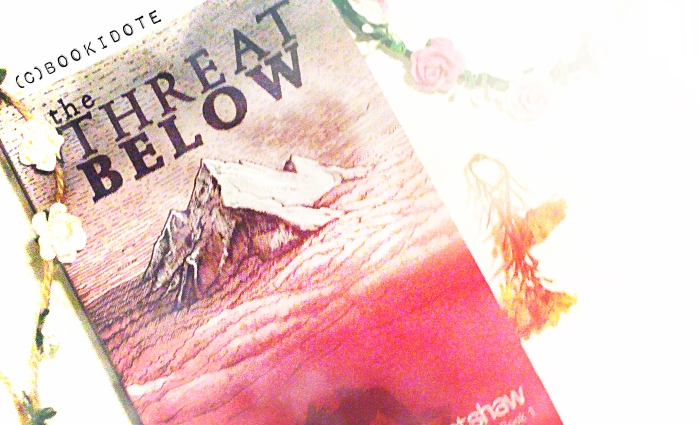 “Battered but not broken.”

Although the ending was easily predictable, The Threat Below is filled with potential. It explores themes from love, religion to creativity, and never seizes to find an interesting angle to explore. The characters and the narration might have dragged the experience to something borderline enjoyable, I still thought this novel is quite an adventure and could deliver a strong sequel. There might have been some major plot holes and some rushing through events, here and then, but the overall experience leads me conclude that The Threat Below is worth a short. Compared to various other dystopian tales, this young adult novel has an interesting vision and Jason Latshaw doesn’t shy from diving into some controversial themes thanks to his unique world-building. In fact, there are a thing or two we can learn from this. Hopefully, the next installment will deliver on all fronts.

Did you read The Threat Below? What did you think about this novel?

You haven’t, you say? How about you read this story for yourself!

You can purchase a copy of The Threat Below

4 thoughts on “The Threat Below by Jason Latshaw”